Home, Part One of Indefinite

I’m headed to Minnesota on Tuesday, and will be there for two weeks, unless something gets better.

The cancer that’s in her lungs isn’t in her bones, but there is cancer in her bones — at least it’s described as a cancer on various medical websites, including the definitive cancer.org. But it can progress into acute myeloid leukemia, and is more prone to do so in older patients, and those afflicted with the kind of myelodysplastic syndrome that affects both red and white blood cell counts — which are both boxes my grandma checks.

Aside from the fatigue, though, her spirits are high. We spoke yesterday, when I told her I would be there for a couple of weeks, and she told me to bring clothes to wear to work in the garden, because there are weeds to be pulled. “They have me on this medication, this new one, and I have to stay out of direct sunlight.”

I firmed up my voice, keeping a comical tone. “You wouldn’t be pulling weeds, anyway, Gramma.”

Right back, and with force, she says, “You don’t know that!”

Okay, Grams. You’re right. I could only laugh. Her mother mowed her own lawn into her 80s, sitting atop the rider mower wearing the light jacket her husband donned to work in the garden, and a bucket hat. She wouldn’t let me do it because I’d have done it wrong.

I come from a line of stubbornly independent women who know what they like, and how, and will accept nothing less, even if it means they’re the ones to make it happen.

When she realized I’d be there through the end of the month, Grams says, “Good. I was worried that I’d get tired of Ken over the three-day weekend.”

Ken’s her boyfriend, for those who’ve just joined in.

For the moment, then, we’re in an okay place. I’m prepared to dust 1,000 knickknacks each day, and to vacuum and polish and clean in every way necessary. I doubt there’s too much ironing that will need to be done, but rest assured I will also do that. And cook or otherwise prepare meals that will give her any kind of nourishment she isn’t currently taking in. And fetch things. And run to appointments, and hopefully, more than anything, be some comfort.

But in the downtime, what I’m most looking forward to, is talking with her as we always have, and as I can’t imagine not doing. I plan to record everything. There are stories I will never get right, stories I’ve been begging her to let me tell, that I want to have on record so I can do a tricky subject the best justice when it does eventually pour out.

“Say,” she said when I was home for Mother’s Day last year, “I want you to go through and tell me what you want.” She gestured around her.

She stopped, clearly caught off guard by that answer. Maybe she thought I’d say, “The photo albums,” or “the table,” or even “the writing desk.” All of those things I would love to have, but they’re components, parts of the one place that has been the most consistent and stable and reliable for the longest part of my life.

Before she could go on to remind me that there are at least four other people who are entitled to lay claim to her possessions, I reassured her, “I know that isn’t practical, but it’s true. Everything. If I could, I would have everything. I will be happy with anything. So you just say that everyone else can take what they’d like and I will sort through the rest.”

I would like the writing desk, and the table. If there are any dish towels she’s embroidered that she’s holding onto, I’d love those, too, as well as her china, the rocking chair, and the last church portrait my great grandparents took before my great grandpa died.

But more than anything, I’d like the linen closet,  and the sound the door to the linen closet makes when it closes. I’d like the hussssh the door to the guest bedroom makes as it brushes across the carpet. Her recipe box. And the drawer in the bathroom in which she keeps the stick of antiseptic that takes the itch out of mosquito bites. One summer, when my cousins and I were all there — a rare occurrence — little me had a wicked case of the jealousies.

Not yet an older sister, I was used to having Grams all to myself. Whenever the cousins came around, they got the attention and the praise usually heaped on me, and I was not good at sharing.

Girl Cousin was covered in mosquito bites. Knowing the secret of the magic mosquito bite stick, I brought her into the bathroom and showed her where in the drawer it was. “It makes it stop itching,” I told her, four years my junior and sweetly trusting my elder wisdom. “If you scratch the bites first, it helps it work better.”

Girl Cousin scratched furiously at a bite on her arm, and then let me apply the antiseptic. The poor little thing howled.

Fast forward a few years later, right before I turned 13. I spent a month in Winona after spending a week in Arkansas with people my mother and her then-boyfriend tried valiantly to get me to consider family. Winona was an oasis. I didn’t have to worry about anyone breathing down my neck, or a day’s worth of chores to complete rather than enjoying my summer vacation. Grams found a bike for me to ride, which I rode the three miles of backroads and across the highway to my Great Grandma’s most days, where we’d play round after round of Spite and Malice.

Grams also, for some reason, bought endless cylinders of Pringles, which I ate with gusto and abandon while watching the mini Buffy marathons that replayed every afternoon.

There is a bin of things from throughout my life that my mother collected, gave me to add to, and then saved, that currently resides with my second ex-stepfather in Oklahoma City. The bulk of the bin will likely be filled with yearbooks and photos and maybe notebooks, if I had enough courage to save them. In that bin should exist a photo from that summer with my grandma. I am bathed in morning sunlight, and standing barefoot in the driveway, garden hose in hand. I’m wearing light blue jean shorts and my prized Kirby Puckett t-shirt, and there’s a bucket full of suds near my feet. I’m smiling toward my grandma, who’s holding the camera from the tiny stoop outside the front door.

That was the last time for a few years that we’d have any meaningful time together. I returned home from that trip and something about my level of happiness was unacceptable to my mother’s boyfriend. I was allowed only the briefest conversation time with Grams, and no more visits until after he left two years later. Those two years felt like 10. If home is fear and misery and chaos, then my mother’s house was home, fine. But my idea of home isn’t nested with my mother, which might be my saving grace.

I recognize her house will change fundamentally once she is no longer in it. It’s not a thing I can maintain composure while thinking about, her no longer being. Because, when her house is no longer hers, where will my home be? 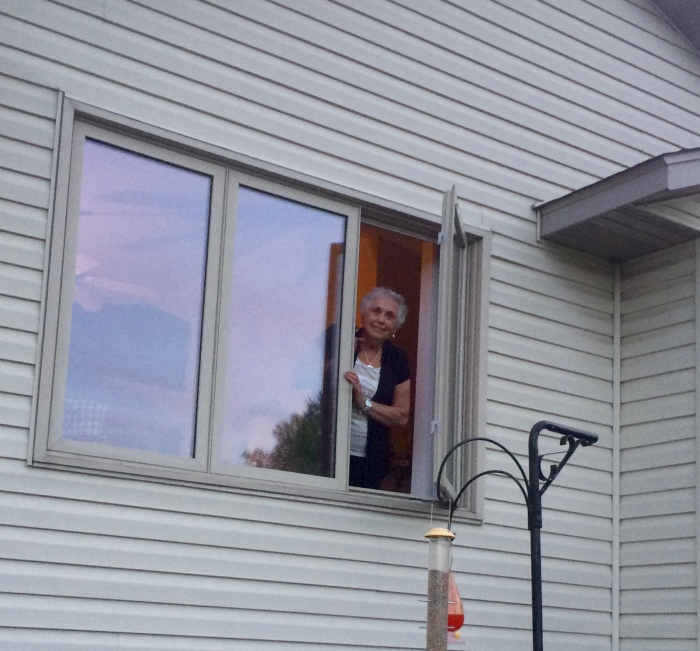 tangents Home is everywhere and nowhere. Home is Queens, St. Croix County, and Southern California. I travel and overthink.
Published May 23, 2016June 16, 2016

2 thoughts on “Home, Part One of Indefinite”